The Sundays in Bed With… meme, hosted by Midnight Book Girl, dares to ask what book has been in your bed this morning. Come share what book you’ve spent time curled up reading in bed, or which book you wish you had time to read today!

Portrait of a Scotsman by Evie Dunmore 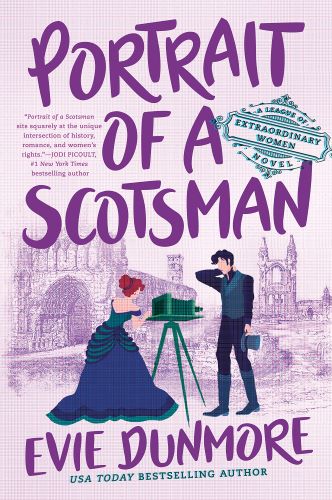 After finishing my first BBNYA 2022 finalist reading assignment, I decided to switch to a different genre. I don’t usually gravitate toward historical romance, but it seems like a huge talking point on bookstagram. Or, at least among a few bookstagrammers I try to keep up with. I had been browsing Book Outlet for Christmas gifts and PORTRAIT OF A SCOTSMAN popped up. It was on Libby, unborrowed, so I thought, “Let’s give this a go.” I’m actually enjoying it.

What I’m enjoying the most is the commentary on high society women and how patriarchal society stifled them. This includes having an opinion and ranges to sexual expression. This excerpt aptly summarizes one aspect:

How bloody little he had planned for this, the time and effort it would take to get used to a wife. Specifically, a high-society wife, raised to be absurdly modest when supposedly their main use was to bear plenty of heirs and spares–no logic in that.

This is only the second historical romance I’ve picked up in recent memory, the first of which was THE LEAGUE OF GENTLEWOMEN WITCHES. They both occur during late 19th century England. However, I think my current read is about to move to Scotland in short order. It seems to be part of a series of works, each of which reads as a standalone novel. If you enjoy Bridgerton on Netflix, the set up of this book is reminiscent to the first season of that show.

Going toe-to-toe with a brooding Scotsman is rather bold for a respectable suffragist, but when he happens to be one’s unexpected husband, what else is an unwilling bride to do?London banking heiress Hattie Greenfield wanted just three things in life:

1. Acclaim as an artist.
2. A noble cause.
3. Marriage to a young lord who puts the gentle in gentleman.

Why then does this Oxford scholar find herself at the altar with the darkly attractive financier Lucian Blackstone, whose murky past and ruthless business practices strike fear in the hearts of Britain’s peerage? Trust Hattie to take an invigorating little adventure too far. Now she’s stuck with a churlish Scot who just might be the end of her ambitions….

When the daughter of his business rival all but falls into his lap, Lucian sees opportunity. As a self-made man, he has vast wealth but holds little power, and Hattie might be the key to finally setting long-harbored political plans in motion. Driven by an old desire for revenge, he has no room for his new wife’s apprehensions or romantic notions, bewitching as he finds her.

But a sudden journey to Scotland paints everything in a different light. Hattie slowly sees the real Lucian and realizes she could win everything–as long as she is prepared to lose her heart.

What is your current “Sundays in Bed With” read?